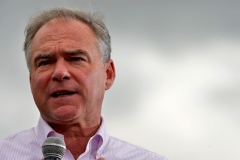 At the U.S. Capitol on Thursday, CNS News asked the senator, “Will President Biden secure the southern border?”