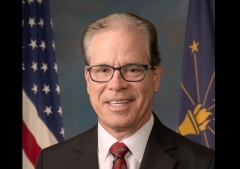 (CNS News) -- When asked if he agreed with Pope Francis’ statement that abortion is “truly murder,” Senator Mike Braun (R-Ind.) said, “I think I’ve been one of the staunchest defenders here in the Senate of the right to life and I’ll continue to do so.”

At the U.S. Capitol on Thursday, CNS News asked the senator, “Pope Francis recently said that abortion is ‘truly murder,’ do you agree with him?”

Braun, a Catholic, responded, “I’m a believer in the sanctity of life and I ran on that, so I think that anyone who claims to be a Catholic would have a tough time not agreeing with the statement that life is important.”

“And how you phrased it, it’s interesting to hear the pope say that, and I think I’ve been one of the staunchest defenders here in the Senate of the right to life, and I’ll continue to do so.”