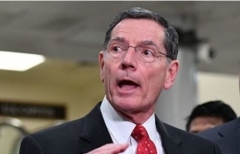 (CNS News) -- When asked if Facebook should be allowed to censor speech on its platform, Senator John Barrasso (R-Wyo.) did not answer directly but said, “Big Tech is starting to look more and more like Big Tobacco. They have an addictive product and they know it.”

At the U.S. Capitol on Wednesday, CNS News asked, “Should Facebook be able to restrict speech on its platforms?”

Barrasso responded, “We had the hearings yesterday and there were a lot of questions raised, and they’re starting to look more and more like Big Tobacco.”

“They have an addictive product and they know it, and instead of admitting it, they deny it, and we need to look under the hood and see what’s going on,” said the senator.