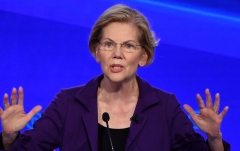 (CNS News) -- When asked whether people should be required to produce an ID in order to vote, just as they must produce an ID to buy alcohol, Sen. Elizabeth Warren (D-Mass.) did not respond.

Senator Warren replied, "I think that’s up to the states."

CNS News then asked, "What about to vote? Should it be up to the states if they should use one to vote?"

Senator Warren did not respond and walked away.