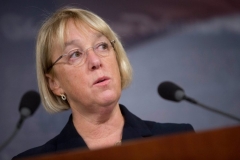 (CNS News) -- When asked if Congress would ever balance the federal budget given that President Biden's budget proposal racks up $14.5 trillion in deficits over the next 10 years, Sen. Patty Murray (D-Wash.) did not answer directly but said the U.S. is in an "economic crisis" and government must make "investments" to get the economy "back on track."

At the Capitol on Tuesday, CNS News asked Senator Murray, “President Biden has presented Congress with a budget that proposes running $14.5 trillion in debt, in deficits over the next decade. Will Congress ever balance the budget?”

She answered, “Look, I've been chair of the Budget Committee. I've worked for a long time to make sure that we are able to pay our bills in this country. We are right now in an economic crisis.”

“Our country is recovering from a pandemic that hurt every single family, every single community, every single budget,” said the senator. “It is critical that we make the investments that we need to get our economy back on track, and that will allow us to be able to deal in the out-years with our budget.”

When CNS News asked Murray for when a balanced budget might happen, she did not answer but moved on.

The New York Times has reported, "President Biden would like the federal government to spend $6 trillion in the 2022 fiscal year, and for total spending to rise to $8.2 trillion by 2031. That would take the United States to its highest sustained levels of federal spending since World War II, while running deficits above $1.3 trillion through the next decade." (Emphasis added.)