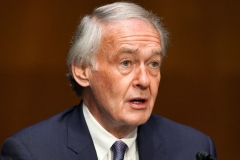 (CNSNews.com) - Sen. Ed Markey (D-Mass.) told CNSNews.com Wednesday that he was unsure whether the budget would ever be balanced, claiming “the Republicans are allergic to good, sound fiscal policy.”

CNSNews.com asked Markey, “President Biden has presented Congress with a budget that proposes running $14.5 in deficits over the next decade. Will Congress ever balance the budget?”

“Well, hopefully on a bipartisan basis we could come together, but I don’t see any evidence of that,” said Markey on how to solve this issue.

As to where to cut funding, Markey said, “The defense budget is just completely out of control,” and “we have to reclaim those tax breaks that the Trump and Bush administrations gave to the wealthiest in our country without any justification.”

Markey pinned Biden’s proposed deficits on the Republicans’ alleged unwillingness to collaborate across the aisle.