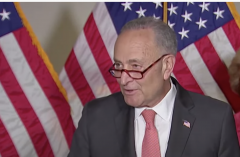 (CNS News) - When asked if Congress would ever balance the budget given that President Joe Biden's budget proposal projects the federal government will run $14.5 trillion in cumulative deficits over the next 10 years, Senate Majority Leader Chuck Schumer (D-N.Y.) said Biden's plan has revenue generators ("pay-fors") in it that "balance the budget."

At the U.S. Capitol on Tuesday, CNS News asked Schumer: “President Biden has presented Congress with a budget that proposes running $14.5 trillion in deficits over the next decade. Will Congress ever balance the budget, yes or no?”

Schumer replied: “Well, the president's proposal does have pay-fors in it that balance the budget. Now, he wisely, in my opinion, had a 15-year stretch out of the pay-fors and only an 8-year of the spending. Because when your economy is in a hole as Covid has put us in, you need to get that money pumped into the economy.”

“I believe that he's doing the right thing,” added Schumer.

President Biden’s budget proposal includes a Table S-2 that is called “Effect of Budget Proposals on Projected Deficits.” It shows that the “baseline” cumulative deficit in fiscal years 2022 through 2031 is $13.176 trillion. By contrast, the “resulting deficits in the 2022 budget” for the fiscal years 2022 through 2031 are $14.531 trillion. In every one of those ten fiscal years, according to Table S-2, the annual deficit is more than $1.3 trillion.  In the last year, fiscal 2031, the annual deficit would be $1.568 trillion, according to Biden’s proposal.

“Over the long term, the United States does face fiscal challenges, driven principally by underlying demographic pressures on health and retirement programs and inadequate revenue levels,” it says. “There is also uncertainty about the interest rate outlook. The Budget’s proposals prudently address these future challenges by making sure that new proposals are not only fully offset, but reduce deficits in the long run and improve the long-term fiscal outlook.

“The Budget achieves this through reforms in the tax system,” says the Biden proposal.

“Over time, the savings from these reforms would exceed the cost of the investments, and by large and growing amounts,” says Biden’s proposal. “The American Jobs Plan and American Families Plan together are paid for over 15 years. The full set of proposals in the Budget reduce the annual deficit by the end of the 10-year budget window and every year thereafter. In the second decade, the Budget’s proposals reduce deficits by over $2 trillion.

“A Budget that added to long-term deficits would worsen fiscal health, while a Budget that reduced deficits today by underinvesting in the American people would result in slower, more stratified growth that would cause more damage than one that invests appropriately,” says Biden’s proposal. “The Budget responsibly balances these needs and risks by charting an economically and fiscally sound course for the near term and the long term.”