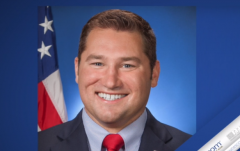 (CNS News) -- When asked whether a person should be required to show an ID in order to vote, Rep. Guy Reschenthaler (R-Penn.) said, “Of course.” He added that Democrats “are the party of hypocrisy” on voter ID, noting that they want high schoolers to vote but want to set an age limit on smoking cigars.

At the U.S. Capitol on June 30, CNS News asked, “Do you think we should require an ID to buy alcohol?”

As to whether an ID should be required to vote, he also replied, “Of course.”

“Well, remember these are also individuals who think high schoolers should vote, but you have to wait until 25 until you can smoke cigars,” he said. “They are the party of hypocrisy.”

“For them, it’s all about driving their narrative,” said the congressman. “It’s not about actually governing or making sense in terms of legislation. It’s all about what gives them an advantage at the ballot box.”

Through their sweeping electoral change legislation, the For the People Act, which was filibustered in the Senate on June 22, Democrats sought to expand federal power over elections and undercut state voter ID laws. Although the legislation is going nowhere now, Democrats are pushing alternative bills.

The Republican National Committee has denounced the Democrats’ efforts, saying, “Democrats are currently attempting a partisan power grab with their radical H.R. 1/S. 1 ‘For The Politicians Act.’” This bill, filibustered for the time-being, “is a federal takeover of state elections that would eviscerate commonsense state voter ID laws currently in place in many states, force states to allow ballot harvesting, and make taxpayers fund the campaigns of career politicians.”