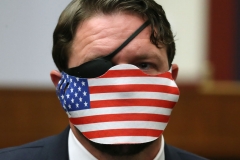 (CNSNews.com) - When asked whether a person should be required to show an ID in order to vote, as is required to purchase alcohol, Rep. Dan Crenshaw (R-Texas) said yes, adding that his colleagues who could not answer that question are “beholden to a radical ideology that doesn’t let them think with common sense.”

On Wednesday at the U.S. Capitol, CNSNews.com asked, “Do you think we should require an ID to buy alcohol?”

“And to vote?” CNSNews.com further prompted him.

To which he also replied, “Yeah.”

“Well, they’re beholden to a radical ideology that doesn’t let them think with common sense, and it kind of forces them to say things they know aren’t true. It’s a funny thing we find ourselves in,” Crenshaw said.

HR 1, the For the People Act, proposed a federal overhaul of elections, centralizing power over them in the federal government. Mail-in voting would be expanded and many voters would automatically be registered. The bill also sought to prohibit states from requiring an ID to vote.

At a press event before the floor vote in which the House of Representatives passed HR 1 on March 3, House Speaker Nancy Pelosi (D-Calif.) said, “So, what we are doing in this fight that we're engaged in is to empower the people. This is called the For The People bill, and in doing so, we combat big, dark, special-interest money in politics and amplify the voice of the American people.”

House Minority Leader Kevin McCarthy (R-Calif.) criticized the sweeping election reform bill, saying in a speech on the House floor on March 2, “Under H.R. 1, future voters could be dead or illegal immigrants or maybe even registered two to three times. Democrats don’t care.”

Republicans in the Senate successfully filibustered the election overhaul. However, Senate Majority Leader Chuck Schumer (D-N.Y.) has made it clear that Democrats are not giving up on the issue.