Sen. Warren: ‘Build it in America’ Bill ‘Best Way To Deal With Our Trade Deficit’ With China 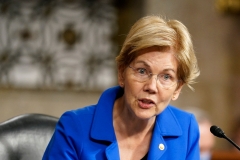 (CNS News.com) – When asked if it is possible for the U.S. to engage in free trade with a communist country such as China, Sen. Elizabeth Warren (D-Mass.) said the “Build it in America” bill that the Democrats are working on “is the best way to deal with our trade deficit and build more jobs.”

At the Capitol on Tuesday, CNS News asked Sen. Warren, “The U.S. trade deficit with China in 2021 was more than $300 billion for the tenth year in a row. Can the U.S. have free trade with a communist country?”

The senator said, “What we’re doing right now is trying to advance a bill that will make American business more competitive. It’s called, ‘Build it in America,’ and that is the best way to deal with our trade deficit and build more jobs here.”