Sen. Marshall: Without a ‘Father Figure in the Family, It’ll Be Hard to Up-bring That Child’ 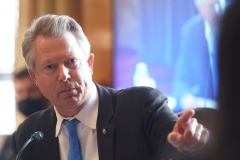 (CNSNews.com) -- When asked if it was a good thing that 42% of the babies born in America in 2020 were born on Medicaid, Sen. Roger Marshall (R- Kans.), a medical doctor, said, “I think that’s a complex question, and I guess it is what it is.” He added that a “huge concern” is the absence of fathers in many families, which makes it very difficult to rear children.

At the Capitol on Thursday, CNSNews.com asked Sen. Marshall, “According to the CDC, 42% of the babies born in America in 2020 were born on Medicaid. Is that a good thing?”

The senator said, “So, as an obstetrician, half the babies I delivered were on Medicaid so that they—they changed the bar to who was able to qualify for it, so that pregnant women could get on it easier and so the babies. I think that’s a complex question, and I guess it is what it is.”

“Well, again, going back to my practice,” Sen. Marshall continued. “Too often there was not a father figure even in the room the last several years. So, I think it’s a cultural issue where there’s just lots of single moms out there.”

“And it is absolutely a huge, huge concern of mine that if there’s not a father figure in the family, it’ll be hard to up-bring that child,” said the senator. “It’s a huge concern. I don’t think it’s related to Medicaid, I don’t think that’s the cause and effect.”