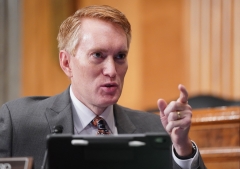 (CNS News.com) – When asked if it is possible for the U.S. to engage in free trade with a communist country such as China, Sen. James Lankford (R-Okla.) said, “We will have some kind of a trade relationship, but it’s clearly not a free trade situation with China.”

At the Capitol on Wednesday, CNSNews.com asked Sen. Lankford, “The U.S. trade deficit with China in 2021 was more than $300 billion for the tenth year in a row. Can the United States have free trade with a communist country?”

The senator said, “We don’t have free trade now with a communist country. We will have some kind of a trade relationship, but it’s clearly not a free trade situation with China.”

“The United States should continue to encourage our manufacturers to be able to do manufacturing outside of China, and let people know what a risk it is to be able to trade with a Communist government and be dependent on their supply chain,” Sen. Lankford said.