Sen. Hawley: 42% of Babies Born on Medicaid is ‘Not a Good Thing at All’ 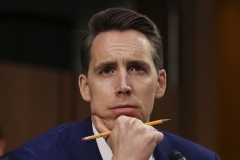 (CNSNews.com) -- When asked if it was a good thing that 42% of the babies born in America in 2020 were born on Medicaid, Sen. Josh Hawley (R- Mo.) said, “Born into families who are below the poverty line, no, that’s not a good thing at all.”

At the Capitol on Thursday, CNSNews.com asked Sen. Hawley, “According to the CDC, 42% of the babies born in America in 2020 were born on Medicaid. Is that a good thing?”

The senator said, “Well, born on Medicaid … born into families who are below the poverty line, I mean, no, that’s not a good thing at all. And I think one of the most important things that the federal government can do, the government at any level can do, is to encourage families with two-parent families.”

“Well, I think statistically, if a correlation between single-parent households headed by women and then kids in poverty, absolutely,” said Hawley. “It just goes—it shows you again, I think, about what happens when you have a father who is absent who chooses to have children, but won’t support them. And it really leaves the mother in a very—I mean a really detrimental position because she’s then got to try to work and trying to support kids.”

“So this is why I say that I think everything we can do to encourage responsible fatherhood to have kids, to raise those kids, to support, to lend support to women that they have—the mother of their children-- I think is absolutely critical,” he added.