Sen. Cornyn: China Doesn’t ‘Play By The Same Rules’ When It Comes To Free Trade 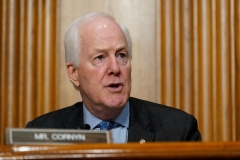 (CNS News.com) –  When asked if it is possible for the U.S. to engage in free trade with a communist country such as China, Sen. John Cornyn (R-Texas) said the authoritarian regime does not “play by the same rules.”

At the Capitol on Thursday, CNSNews.com asked Sen. Cornyn, “The U.S. trade deficit with China in 2021 was more than $300 billion for the tenth year in a row. Can the United States have free trade with a communist country?”

The senator said, “Well, I mean, that’s been the problem ever since Joe Biden championed their membership in the WTO [World Trade Organization]. They don’t play by the same rules. So I think, obviously, it’s a big market for American manufactured goods and agriculture, but I think we’ve got to continue to watch them like a hawk because they don’t play by the same rules.”