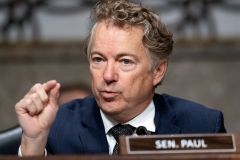 (CNS News.com) – When asked if it is possible for the U.S. to engage in free trade with a communist country such as China, Sen. Ron Paul (R-Ky.) did not answer directly but said the U.S. should reduce regulations and taxes on American businesses to “help level the playing field."

At the Capitol on Tuesday, CNS News asked Sen. Paul, “The U.S. trade deficit with China in 2021 was more than $300 billion for the tenth year in a row. Can the U.S. have free trade with a Communist country?”

The senator said, “The best way to enhance our trade vis-a-vis other countries is to reduce regulations or taxes on our American businesses, and I think that’s helped us to level the playing field.”