Biden’s SCOTUS Nominee Sparks Criticism from the Right, Praise from the Left 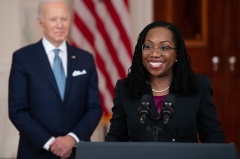 Judge Ketanji Brown Jackson, with President Joe Biden, speaks after she was nominated for Associate Justice of the US Supreme Court, in the Cross Hall of the White House in Washington, DC, February 25, 2022. (Getty Images)

Jackson would be the first black female to serve on the nation’s highest court.

Project 21, a black leadership network, issued a statement responding to the announcement.

"While many in the black community appreciate the measure of representation in President Biden’s selection of a black woman, we even more appreciate the selection of black people for positions of significance based on their professional and academic achievements, contributions to their profession and their character - not just their skin color or gender," said Project 21 member Tim Parrish.

"This notion is the spirit of Dr. King's immortal words of judging people by the content of character rather than the color of their skin," said Parrish.

The network also commented, “The nomination of the first black woman to the Court would have been more historic if it had been based on her experience, wisdom and character.”

Judicial Crisis Network President Carrie Severino stated her concern through multiple tweets on Twitter in response to Biden’s pick for the SCOTUS justice.

With the intended nomination of Ketanji Brown Jackson, Joe Biden has made it clear that his top priority is paying back the left-wing dark money network that spent over one billion dollars to help elect him and Senate Democrats. /1

And that's exactly what we can expect from a future Justice Ketanji Brown Jackson, the darling of the Arabella Advisors network that has pushed her for SCOTUS since before Biden was elected: a politician in robes," Severino added.

Heritage Foundation President Kevin Roberts said, “Ketanji Brown Jackson is the most radical judge ever nominated for a seat on the Supreme Court. A review of her record and judicial philosophy reveals a deeply troubling pattern and raises questions about her ability to be a fair and impartial judge.”

“Based on the information we already know, senators should reject her for this lifetime appointment,” said Roberts.

In a tweet, Sen. Lindsey Graham (R-S.C.) said, “If media reports are accurate, and Judge Jackson has been chosen as the Supreme Court nominee to replace Justice Breyer, it means the radical Left has won President Biden over yet again.”

Susan B. Anthony List President Marjorie Dannenfelser said, “Joe Biden is fulfilling his promise to only appoint justices who support the Roe v. Wade regime of abortion on demand up to birth – a policy so extreme only a handful of countries in the world hold it, including North Korea and China."

"Ketanji Brown Jackson is backed by many of America’s most radical pro-abortion groups," said Dannenfelser. "She is on record opposing the free speech rights of pro-life advocates pleading to save lives outside abortion centers and supporting the false claim that abortion is ‘health care.’ We have no doubt she will work with the most pro-abortion administration in history to enshrine abortion on demand nationwide in the law.”

Catholics for Choice, an organization that supports abortion, embraces Jackson as Biden’s SCOTUS nominee. President Jamie L. Manson responded to Biden’s announcement that Judge Jackson is “a highly-respected jurist” and “has a long and distinguished record of legal work and judicial decisions that protect and advance the constitutional rights of marginalized Americans, including women and pregnant people, immigrants, and people with disabilities.”

“In her Senate confirmation hearing last year,” Manson continued, “Judge Jackson expressed a clear and firm commitment to the principle that true religious liberty involves both freedom of and freedom from religion, and her rulings in favor of unions, environmental protections, and reproductive justice, along with her experience working as a public defender, align with the Catholic social justice values of human dignity, uplifting the poor, and responsible stewardship of the earth.”

Justice Stephen Breyer announced in a letter to the president late January that he was retiring as an Associate Justice of the U.S. Supreme Court after 28 years and planned for this decision to be carried out either late June or early July.