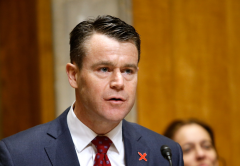 (CNS News) -- In reference to the Democrats’ “For the People Act,” which would eliminate state voter ID laws and was filibustered by Republicans on Tuesday, Sen. Todd Young (R-Ind.) said he favors requiring voters to show an ID, and added that it is “troubling that the Democrats would like to nationalize our election system.”

“This is the absolute wrong message to send at a time when our nation is divided on so many fronts,” he said. “We ought to at least be able to agree on free and fair elections controlled by the people of our respective states, which has been the historical precedent.”

S.1, the For the People Act, was initially passed as H.R 1 on March 3 in the House of Representatives. The legislation would have given the federal government sweeping powers over elections and overridden state voter ID laws.

Senate Republicans successfully filibustered the bill on Tuesday, preventing it from moving forward in the Senate.

Speaking about S.1 on the Senate floor, Senate Majority Leader Chuck Schumer (D-N.Y.) said, “Our country has supposedly come a long way since African-Americans in the South were forced to guess the number of jelly beans in a jar in order to vote; but some of these voter suppression laws in Georgia and other Republican states smack of Jim Crow -- Jim Crow in the 21st Century, rearing its ugly head once again.

"... And that’s why we need S.1. so badly, a bill that would combat all of these voter suppression efforts by restoring critical parts of the Voting Rights Act; a bill that would make it easier—not harder—to vote by automatically registering American voters when they get a driver’s license; a bill that would limit dark money and corruption in our politics, and much more."