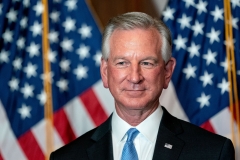 (CNS News) -- When asked whether the Biden administration should work with Facebook to suppress postings it considers vaccine misinformation, Sen. Tommy Tuberville (R-Ala.) said, “There should be no suppression on the Internet.”

At the U.S. Capitol on Tuesday, CNS News asked the senator, “Should the Biden administration work with Facebook to suppress any postings they consider to be vaccine misinformation?”

Sen. Tuberville said, “Well, there should be no suppression on the Internet. All the information needs to be out there where people can make the right decision. Obviously, gotta’ dig through the information that’s wrong – there’s always some wrong information out there – but surely we can find enough that’s right.”

On July16, Psaki said the administration is “in regular touch with these social media platforms, and those engagements typically happen through members of our senior staff, but also members of our COVID-19 team, given, as [U.S. Surgeon General] Dr. Murthy conveyed, this is a big issue of misinformation, specifically on the pandemic.”