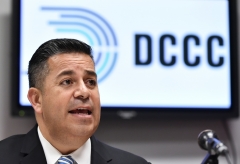 At the U.S. Capitol on Tuesday, CNS News asked the senator, “Should the Biden administration work with Facebook to suppress any postings they consider to be vaccine misinformation?”

“I held a hearing on this issue, I still believe that spreading misinformation is killing people,” he said.

CNS News asked again, “And should the Biden administration be working with Facebook to do that?”

Sen. Lujan said, “I think that, as a member of the United States Senate, we should be doing more to ensure that these actions are taking place. But the social media platforms should be taking action on their own, if they’ve identified the spread of misinformation. So, I won’t speak for the president. I know that there’s more responsibility that the Senate has to get this job done.”

On July16, Psaki said the administration is “in regular touch with these social media platforms, and those engagements typically happen through members of our senior staff, but also members of our COVID-19 team, given, as [U.S. Surgeon General] Dr. Murthy conveyed, this is a big issue of misinformation, specifically on the pandemic.”

Her statement makes it abundantly clear they want people banned for simply disagreeing with the government’s pre-approved narrative. https://t.co/3Yjo9314cW