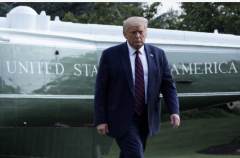 (CNSNews.com) - President Donald Trump sent out a series of tweets in the last 24 hours expressing his reservations about the accuracy of universal mail-in voting.

“With Universal Mail-in Voting (not Absentee Voting, which is good), 2020 will be the most INACCURATE & FRAUDULENT Election in history,” Trump said in a tweet.

“It will be a great embarrassment to the USA,” he said.

“Delay the Election until people can properly, securely and safely vote???” he asked.

The U.S. Election Assistance Commission maintains a page on which it explains the differences between absentee voting and universal voting by mail. The commission says:

“Each state has its own laws and regulations governing when, where, and how voters can cast ballots. All states allow for some form of absentee voting by mail, however this process is administered in different ways by the states, including:

“Excuse required absentee voting: A voter must provide a reason why they are casting an absentee ballot and cannot appear to vote on Election Day.

“No-excuse required absentee voting: A voter does not need to provide a reason why they are casting an absentee ballot and cannot appear to vote on Election Day.

“Vote by mail: All registered voters in the jurisdiction are mailed a ballot.”

“New York Mail-in voting is in a disastrous state of condition,” Trump said in the first tweet he sent out on this issue in the last 24 hours.

“Votes from many weeks ago are missing—a total mess,” he said. “They have no idea what is going on. Rigged Election. I told you so. Same thing would happen, but on massive scale, with USA. Fake News refuses to report!”

“Mail-in voting is already proving to be a catastrophic disaster,” Trump said in another tweet. “Even testing areas are way off. Dems talk of foreign influence in voting, but they know that Mail-in Voting is an easy way for foreign countries to enter the race. Even beyond that, there’s no accurate count!”

In another tweet, Trump linked to a story done by CBS This Morning about mail-in voting.

“Check out this Mail-in Voting experiment by a local news station!” Trump said.

The headline on the CBS This Morning story was: “Vote-by mail experiment reveals potential problems within postal voting system ahead of November election.”

“Out of the initial batch mailed a week earlier, 97 out of 100 votes had arrived,” said the CBS This Morning Report. “Three simulated persons, or 3% of voters, were effectively disenfranchised by mail by giving their ballots a week to arrive. In a close election, 3% could be pivotal.”.