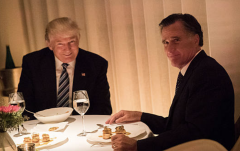 The Senate voted 57 to 43 on Saturday afternoon that former President Donald Trump was guilty of the impeachment article brought against him by the House of Representatives. In order to be found guilty, the Senate would have needed a two-thirds majority--or 67 votes.

All Senate Democrats voted that Trump was guilty. They were joined by seven Senate Republicans.