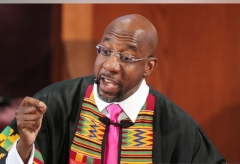 (CNSNews.com) - Sen.-elect Raphael Warnock (D.-Ga.), a Baptist minister, says that his “ultimate allegiance is to God.”

While successfully running for the Senate over the past year in Georgia, Warnock indicated that he favored same-sex marriage and legalized abortion.

“Reverend Warnock believes that our nation’s commitment to equality is sacred and inviolable. That belief has led him to routinely advocate from the pulpit on behalf of the LGBTQ+ community…and to celebrate in times of triumph, as after the Supreme Court’s recognition of marriage equality,” says his campaign website.

“With Washington politicians still working to overturn Roe v. Wade and repeal the Affordable Care Act, which would allow insurance companies to treat pregnancy as a pre-existing condition, Reverend Warnock recognizes that women’s health care is under attack like never before,” says his campaign website. “As a Senator, he will stand up for reproductive justice and a woman’s right to choose.

“Warnock believes in a woman’s right to choose and that it is a decision between her and her doctor – not the government,” it says.

In a sermon that he gave in 2011 that is posted on YouTube, Warnock said: “America, nobody can serve God and the military.

In a news program broadcast this November, 11Alive, an Atlanta television station, reported on a controversy that had arisen over Warnock’s statement in this sermon that “nobody can serve God and the military.” The report included video of Warnock explaining the statement and putting it in context.

The report cites Warnock’s campaign as explaining that in the statement he was referencing a passage from the Gospel, Matthew 6:24, which says: “No man can serve two masters.”

“The Gospel lesson says that you cannot serve God and Mammon, that a person cannot have two masters,” the report shows Warnock explaining at a press conference. “It is a spiritual lesson that is basic and foundational for people of faith.

“What I was expressing was the fact that as a person of faith my ultimate allegiance is to God, and, therefore, whatever else that I may commit myself to it has to be built on a spiritual foundation,” said Warnock.

Warnock is the senior pastor at the Ebenezer Baptist Church in Atlanta. This was the former church of the late Rev. Martin Luther King, Jr.

This is a screen capture from Warnock's campaign website:

__alt__
This is a screen capture from Warnock's campaign website: