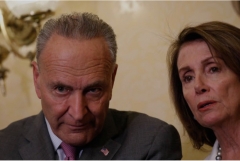 (CNSNews.com) - Senate Majority Leader Chuck Schumer (D.-N.Y.) sent out a tweet on Friday expressing his support for Supreme Court nominee Judge Ketanji Brown Jackson and stating that she will be someone who protects “the voiceless and the vulnerable.”

“With her exceptional qualifications, Judge Ketanji Brown Jackson will be a Justice who will uphold the Constitution and protect the rights of all Americans, including the voiceless and the vulnerable,” Schumer said.

Schumer followed up with another tweet that said: “This historic nomination of Judge Ketanji Brown Jackson is an important step toward ensuring the Supreme Court reflects the nation as a whole. As the first Black woman Supreme Court Justice in the Court’s 232-year-history, she will inspire countless future generations of Americans.”