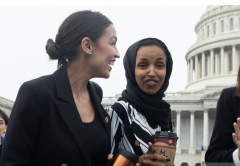 (CNSNews.com) - Rep. Ilhan Omar (D.-Minn.) sent out a tweet on Wednesday afternoon calling for the abolition of Immigration and Customs Enforcement, the division of the Department of Homeland Security responsible for enforcing the nation’s immigration laws within the country.

“Now is the time to #AbolishICE,” Omar said in her tweet.

The tweet forwarded a story from a publication called Refinery29, which describes itself as “the leading global media company focused on young women.”

The headline on the story was: “ICE Is Using COVID-19 As An Excuse To Raid Homes & Detain Undocumented People.”

The story said in part:

“Across the country, U.S. Immigration and Customs Enforcement (ICE) is once again executing large scale enforcement actionsagainst undocumented immigrants, detaining hundreds of people in what they are calling “targeting criminal aliens.” The agency is blaming the coronavirus pandemic on the crackdown, claiming to be focused on people who are committing criminal activity and causing suffering during the pandemic.

"The arrests are widespread and, as of Tuesday, ICE says it detained over 2,000 people during the sweep: 63 people in Colorado and Wyoming; 122 across Utah, Montana, Nevada, and Idaho; 83 in New York City; 300 people in the Los Angeles area; and 125 in Central and South Texas.”

The story quoted a press release by Tony H. Pham, the senior official performing the duties of ICE Director.

“The aliens targeted during this operation preyed on men, women and children in our communities, committing serious crimes and, at times, repeatedly hurting their victims,” said Pham. “By focusing our efforts on perpetrators of crimes against people, we’re able to remove these threats from our communities and prevent future victimization from occurring. Through our targeted enforcement efforts, we are eliminating the threat posed by these criminals, many of whom are repeat offenders.”