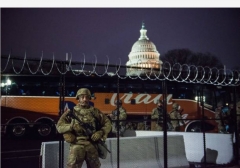 This is the current fence, which runs around Capitol Hill, that was constructed after Jan. 6 riot. (Photo by Liz Lynch/Getty Images)

(CNSNews.com) - The “task force” of advisors that House Speaker Nancy Pelosi (D.-Calif.) put together after rioters stormed the U.S. Capitol on Jan. 6 has recommended that Congress immediately approve funding to design and install “mobile fencing” around the Capitol.

As of now, the area of Washington, D.C. where the Capitol sits is surrounded with a seven-foot high chain-link fence topped with razor wire.

“The current temporary fence surrounds such a tremendous area that it requires significant personnel resources to monitor its entire length,” the advisors said in their report.

“As the fencing comes down, we recommend it be replaced with a mobile fencing option that is easily erected and deconstructed and an integrated, retractable fencing system in the long term to secure both the Capitol Building and Congressional office buildings,” said the group’s report.

“The Congress must immediately fund infrastructure contracts managed by the Architect of the Capitol to repair or replace doors and windows, authorize mobile fencing design and procurement, and authorize U.S. Army Corps of Engineers’ assessment of long-term improvements to perimeter fencing and security surveillance systems."