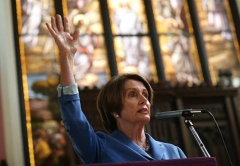 (CNSNews.com) - House Speaker Nancy Pelosi (D.-Calif.) reacted to the Supreme Court’s decision to overturn Roe v. Wade at a press briefing on Friday where she said that a “a woman’s fundamental health decisions are her own to make in consultation with…her faith.”

Last month, San Francisco Archbishop Salvatore Cordileone, told Pelosi that as long as she maintains her position advocating legalized abortion she should not present herself for communion at Catholic Masses.

“This is deadly serious. But we are not going to let this pass,” Pelosi said Friday about the Supreme Court’s decision to overturn Roe.

“A woman's fundamental health decisions are her own to make in consultation with her doctor, her faith, her family,” said Pelosi. “Not some right-wing politicians that Donald Trump and Mitch McConnell packed the court with.

“While Republicans seek to punish and control women, Democrats will keep fighting ferociously to enshrine Roe vs. Wade into the law of the land,” said Pelosi. “This cruel ruling is outrageous and heart-wrenching, but make no mistake, again: It's all on the ballot in November.”

On May 20, Archbishop Cordileone sent Pelosi a notification telling her she was not to receive communion.

“A Catholic legislator who supports procured abortion, after knowing the teaching of the Church, commits a manifestly grave sin which is a cause of most serious scandal to others,” the archbishop said in his notification. “Therefore, universal Church law provides that such persons ‘are not to be admitted to Holy Communion.’”

“That is why I communicated my concerns to you via letter on April 7, 2022, and informed you there that, should you not publicly repudiate your advocacy for abortion “’rights’ or else refrain from referring to your Catholic faith in public and receiving Holy Communion, I would have no choice but to make a declaration, in keeping with canon 915, that you are not to be admitted to Holy Communion,” said the archbishop.

“As you have not publicly repudiated your position on abortion, and continue to refer to your Catholic faith in justifying your position and to receive Holy Communion, that time has now come,” he said.

“Therefore, in light of my responsibility as the Archbishop of San Francisco to be ‘concerned for all the Christian faithful entrusted to [my] care’ (Code of Canon Law, can. 383, §1), by means of this communication I am hereby notifying you that you are not to present yourself for Holy Communion and, should you do so, you are not to be admitted to Holy Communion, until such time as you publically repudiate your advocacy for the legitimacy of abortion and confess and receive absolution of this grave sin in the sacrament of Penance,” the archbishop told Pelosi.