Pelosi Signs 7-Nation Declaration: ‘The Climate Crisis is the Existential Threat of Our Time’ 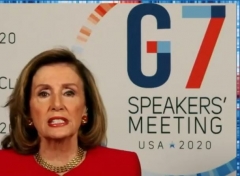 (CNSNews.com) - House Speaker Nancy Pelosi (D.-Calif.) on Saturday hosted a virtual meeting of the heads of the parliaments of the member countries of the G-7 (the United States, the United Kingdom, Canada, France, Germany, Italy and Japan).

At the conclusion of the summit, the parliamentary leaders issued a declaration on “Addressing the Climate Crisis with Economic and Environmental Justice for All.”

“The climate crisis is the existential threat of our time, jeopardizing the health and well-being of every family in every community around the world,” said the declaration, which Pelosi signed.

“Atmospheric carbon dioxide concentrations in 2020 are among the highest averages ever recorded,” it said.

“The planet suffered through the second hottest year ever in 2019,” said the Declaration. “As the Earth heats up, climate-related impacts, including heat waves, hurricanes, wildfires, droughts, and flooding, are worsening. The great rivers of our world are beginning to dry up, depriving millions of water, food, jobs, transportation and commerce. The degradation of the oceans is also a great matter of concern as we stated in Brest last year.”

Pelosi sent out a tweet that included a video of her opening remarks at the summit.

“For the verdict of science is clear: The climate crisis is real and its consequences are undeniable,” Pelosi said.

“And every year the crisis accelerates,” Pelosi said. “There is no time to deny the reality of this crisis which jeopardizes the public health of our communities, threatening clean air and clean water, jeopardizes the economic security of our families.”