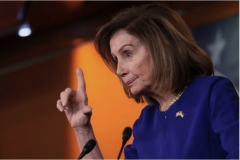 (CNSNews.com) - House Speaker Nancy Pelosi (D.-Calif.) sent out a tweet on Monday boasting about what she perceived to be the tremendous performance of the American economy.

Three days later, the Bureau of Economic Analysis reported that the nation’s Gross Domestic Product had declined at an annual rate of 1.4 percent in the first quarter of this year.

“America has seen the fastest economic growth in almost 40 years, with GDP growing last year by 5.7%,” said Pelosi in her tweet.

On Thursday, the BEA put out its advance estimate of the economy’s performance in the first quarter of 2022.

“Real gross domestic product (GDP) decreased at an annual rate of 1.4 percent in the first quarter of 2022, according to BEA.