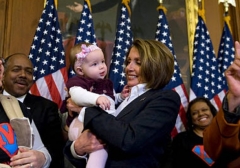 (CNSNews.com) - House Speaker Nancy Pelosi (D.-Calif.) on Thursday put out a statement calling the Supreme Court “cowardly” for not issuing an injunction to stop enforcement of a Texas law, which went into effect on Wednesday, that prohibits aborting babies who have a detectable heartbeat.

“The Supreme Court’s cowardly, dark-of-night decision to uphold a flagrantly unconstitutional assault on women’s rights and health is staggering,” said Pelosi. “That this radically partisan Court chose to do so without a full briefing, oral arguments or providing a full, signed opinion is shameful.

Here is the full text of Pelosi’s statement:

Washington, D.C. – Speaker Nancy Pelosi issued this statement after the Supreme Court ruled in the middle of the night to leave SB8, the most restrictive abortion ban in fifty years, in place:

“‘The Supreme Court’s cowardly, dark-of-night decision to uphold a flagrantly unconstitutional assault on women’s rights and health is staggering.  That this radically partisan Court chose to do so without a full briefing, oral arguments or providing a full, signed opinion is shameful.

“‘SB8 delivers catastrophe to women in Texas, particularly women of color and women from low-income communities.  Every woman, everywhere has the constitutional right to basic health care.  SB8 is the most extreme, dangerous abortion ban in half a century, and its purpose is to destroy Roe v. Wade, and even refuses to make exceptions for cases of rape and incest.  This ban necessitates codifying Roe v. Wade.

“‘Upon our return, the House will bring up Congresswoman Judy Chu’s Women’s Health Protection Act to enshrine into law reproductive health care for all women across America.

“‘SB8 unleashes one of the most disturbing, unprecedented and far-reaching assaults on health care providers – and on anyone who helps a woman, in any way, access an abortion – by creating a vigilante bounty system that will have a chilling effect on the provision of any reproductive health care services.  This provision is a cynical, backdoor attempt by partisan lawmakers to evade the Constitution and the law to destroy not only a woman’s right to health care but potentially any right or protection that partisan lawmakers target.

“‘When the Supreme Court takes up its reproductive rights case this year, we urge it to uphold, as Justice Sotomayor wrote in her dissent, ‘its constitutional obligations to protect not only the rights of women, but also the sanctity of its precedents and of the rule of law.’”