Pelosi on Backing Legislation to Guarantee Abortion on Demand: ‘I Come to This as a Catholic Mother…’ 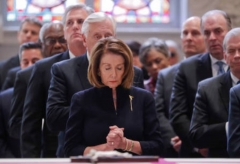 (CNSNews.com) - House Speaker Nancy Pelosi (D.-Calif.) gave a speech on the House floor today talking about her status as a “Catholic mother” before the chamber voted to approve the Women’s Health Protection Act—which guarantees a nation-wide right to abortion on demand.

“I come to this as a Catholic mother of five in six years and one week and with the joy that all that meant to us,” said Pelosi.

“But with the recognition that it was my husband and I –our decision.  It was our decision,” Pelosi said. “And we should not, in this body or in that Court, be making decisions for the women in America.”

“We are standing on the side of women to defend their freedoms and to uphold this truth: every woman, everywhere has the constitutional right to basic reproductive health care–no matter what state you live in,” Pelosi said.

“Constitutional rights are not meted out geographically,” she said. “They are for the country.”

The bill passed the House by a vote of 218 to 2011. Only one Democrat—Rep. Henry Cuellar of Texas—voted against it.

Here is the full transcript of Pelosi’s floor speech on the Women’s Reproductive Health Act:

Washington, D.C. – Speaker Nancy Pelosi delivered remarks on the Floor of the House of Representatives in support of H.R. 3755, the Women’s Health Protection Act.  Below are the Speaker’s remarks:

"Speaker Pelosi.  Thank you very much, Madam Speaker.  I thank the gentleman for yielding and thank him for this leadership on this very important issue and to all of our colleagues in this pro-choice House Democratic Caucus.  This is the first time, Madam Speaker, that we have a pro-choice Democratic [Majority] with a Democratic president.  And the timing could not be better, because of the assault that has been made on the constitutional rights of women in our country.

"Madam Speaker, coming to the Floor today, I recall an experience when I was in high school.  Now, that was a long time ago.  We were in a debate – extemporaneous debate situation.  And you had to pick something out of a hat and then speak to it.  Well, a person, a friend of mine, drew the question, and it said – now again, ancient history, a long time ago – it said, ‘Do women think?’  That was the question she had to speak to: ‘Do women think?’  It seemed horrible at the time.  It seems out of the question, beyond horrible now.

"Today, years later, it seems that there are some who want to debate that question, because the disrespect for women and their ability to determine the size and timing of their family and so many other things is disrespected in the action taken by the state of Texas.  But even worse than that – because what do you expect? – worse than that was the decision of this Court, the Supreme Court of the United States, to embrace the horror of it all, in terms of the legislation and what it did to remove the sanctity of private decision-making from women.  But also, that it gave an imprimatur to vigilantism.  Something so outrageous, so unpatriotic, so un-American – madly embraced by this shameful Court with total disregard for the precedent that the Court has already established: that Roe v. Wade was constitutional.

"So today, I want to thank Judy Chu for her leadership.  Congress in, Congress out, but now a Majority and a President and a Democratic Senate by passing the – her leadership in introducing again and again and advocating the Women's Health Protection Act.  And we are standing on the side of women to defend their freedoms and to uphold this truth:  every woman, everywhere has the constitutional right to basic reproductive health care – no matter what state you live in.  Constitutional rights are not meted out geographically.  They are for the country.  Again, I salute Congresswoman Chu, Chair of the Contraception and Family Planning Task Force and the Pro-Choice Caucus, that's been introducing this bill over and over again.  Again, we have produced legislation that can become law.

"For years, radical restrictions on women's reproductive health freedoms have been pushed across the nation, with 2021 on track to be the worst legislative year for women's health rights.  I come to this as a Catholic mother of five in six years and one week and with the joy that all that meant to us.  But with the recognition that it was my husband and I – our decision.  It was our decision.  And we should not, in this body or in that Court, be making decisions for the women in America.  As of July, 90 reproductive health restrictions have been enacted, more than in any year since Roe v. Wade was enacted in 1973.

"But here's the thing: it's important for the women of America to know that, as this impedes their right to make decisions, the same forces at work don't want in vitro fertilization – actually, even the state of Mississippi rejected that, their prohibition on that – stand in the way of reproductive health and guidance in terms of family planning, birth control and the rest.  It's important for American women to know what we are up against when it comes to intrusion into the privacy of a family's life.  You would think with how they are so averse to governance in any way they wouldn't be so bullish about going into people's private lives in the way that they do.

"What the Supreme Court did was cowardly – a cowardly, dark-of-night decision and to allow that bill to go into effect.  How could it be?  Because it was a decision.  The Court made a decision, but the Republicans in Congress and the then-President made a decision to, in a way that was almost shameful, make sure that so many Justices on the Court – I say shameful because the last one, which they railroaded through – while opposing the review of a Democratic president's suggestion a few years earlier, saying they didn't have enough time.  A year.  They had enough time – a month.

"We know that – I just want to say this about Roe.  In Roe, the Supreme Court held that the personal liberty is protected by the Constitution, which the Court had recognized as extending to decisions relating to marriage, procreation, contraception, family relations, child rearing.  And it's broad enough to encompass a woman's decision whether or not to terminate her pregnancy.  SB 8 is extreme: banning abortion for most women before they even know.  Sometimes I wonder if they don't need a lesson in the birds and the bees.  But again, I just want to go to this point.  SB 8 unleashes one of the most disturbing, unprecedented, far-reaching assaults on health care providers and on anyone who helps a woman in any way access an abortion, by creating a vigilante bounty system that will have a chilling effect on the provisions of any health care services.  And what's next?  What's next with these vigilantes and their bounty system?

"Okay, so, my colleagues – I associate myself with their remarks on all of this, because they bring so much knowledge of the Constitution, knowledge of the history of – since 1973 and even studying it before.  Diana DeGette, one of the Co-Chairs of the Caucus, fought this issue in the courts and won, fought it in the court of public opinion, fought it in the Congress of the United States.  She and Barbara Lee and so many – of course,  Judy Chu – so many of our women have taken the lead on this.  But again, although about a third of our Caucus – more than a third – are women, our male colleagues have been very strong on this.  Therefore, we will have today a vote for women, a vote for respect for women, a vote for decency, a vote for pride in our Constitution and in our women.

"With that, I yield back the balance of my time."