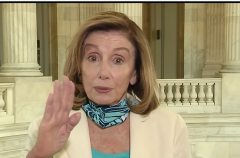 On May 15, Pelosi’s House passed the HEROES Act for additional COVID-19 relief. According to the Congressional Budget Office, it would cost an additional $3.475 trillion.

Prior to that, in March, Congress had passed and President Donald Trump had signed the CARES Act, which provided $2 trillion in COVID-19 relief.

“What Senator McConnell put forth is fraudulent,” Pelosi said.

“It is, as Leader Schumer said, emaciated,” she said. “It is not—they call it a skinny bill and he calls it an emaciated bill and I join him in that.

“It is only a check-the-box so that some of his endangered Republican senators can go home and say: Well, see, I tried. But it isn’t trying,” said Pelosi.

“It is not even an attempt to do the right thing, and Mitch McConnell knows that,” she said. “Because he has to satisfy those Republicans in his caucus who do not want to spend one more dollar, whether it’s feeding the food insecure children in our country, saving their families from eviction, stopping the dismantling of the Postal Service so that people can vote without risking their health.