Joe Biden: ‘Our President is Not Above the Law’ 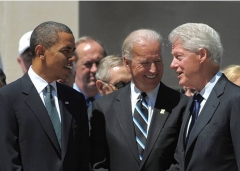 (CNSNews.com) - President-elect Joe Biden sent out a tweet on Saturday reflecting, philosophically, on the fact that the president of the United States “is not above the law.” He made no reference to any particular president.

“Our president is not above the law,” Biden said.

“Justice serves the people—it doesn’t protect the powerful,” he said.

On Friday, when he announced people he was appointing to positions in the Justice Department, Biden had similarly sent out a tweet, saying we “need to restore the honor, the integrity, and the independence of the Department of Justice.”

Over most of the last two years, the Justice Department has been overseen by William G. Barr, who resigned shortly before Christmas.

In a story published on Dec. 1, 2020, the Associated Press reported that Barr had said “to date, we have not seen fraud on a scale that could have effected a different outcome in the election.”

“Orchestrating a mob to pressure Congress is inexcusable,” Barr said. “The president’s conduct yesterday was a betrayal of his office and supporters.”

In his tweet about the Justice Department, Biden said: “We need to restore the honor, the integrity, and the independence of the Department of Justice in this nation—and this is the group that will get it done.”