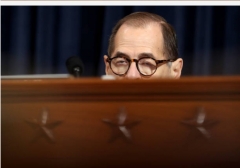 (CNSNews.com) - The $715-billion infrastructure bill that passed the U.S. House of Representatives earlier this month includes a $2,400,000 earmark for that is called the “Riverside Drive Pedestrian Mall” in New York, New York.

The money was request by Rep. Jerrold Nadler (D.-Calif.) in whose Manhattan-based district the money would be spent.

The 1052nd project listed in this section of the bill is called the “Riverside Drive Pedestrian Mall.” The bill specifies that it will get $2,400,000.

On his congressional website, Nadler had posted a letter he sent in April to the chairman and ranking member of the House Transportation and Infrastructure Committee requesting that they provide $2,500,000 million for this project ($100,000 more than the final infrastructure bill included).

“The project is an appropriate use of taxpayer dollars and is anticipated to have the following benefits: greatly improve pedestrian access and safety along Riverside Drive and to the adjacent Riverside Park,” said Nadler.