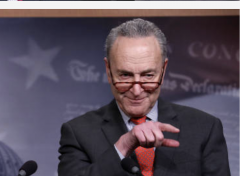 (CNSNews.com) - Senate Majority Leader Chuck Schumer (D.-N.Y.) sent out a tweet on Thursday calling for the federal government to end its prohibition on marijuana.

“We must end the federal prohibition on marijuana, make criminal justice reforms, and ensure equity for all communities—especially those of color—impacted by the War on Drugs,” Schumer said.

“This is why I’m working with @SenBooker and @RonWyden on legislation for comprehensive marijuana reform,” said Schumer.

“Did you know that Black American’s are 3.6 times more likely to be arrested for #marijuana than white Americans,” it says.

The federal Centers for Disease Control and Prevention states on its website that marijuana use can have a deleterious impact on the human brain.

“What are the long-term effects of marijuana on the brain?” the CDC website asks.

“Marijuana also affects brain development,” says the CDC. “When marijuana users begin using as teenagers, the drug may reduce attention, memory, and learning functions and affect how the brain builds connections between the areas necessary for these functions.

“Marijuana’s effects on these abilities may last a long time or even be permanent,” says the CDC. “This means that someone who uses marijuana may not do as well in school and may have trouble remembering things.”