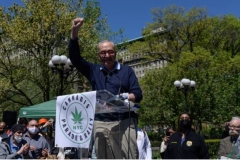 “It’s the Cannabis Parade and Rally in New York City,” Schumer said in one tweet. “This year, we finally equitably legalized marijuana in New York.

“And I won’t stop working to end the federal prohibition on marijuana and undo the harms of the War on Drugs,” he said.

“The War on Drugs has been a war on people,” Schumer said in a following tweet.

“Today,” said Schumer, “we celebrated NY’s equitable legalization at the Cannabis Parade and Rally in NYC.

“I’ll keep working to end the federal prohibition,” he said.

In his speech at the Cannabis Parade and Rally, which was posted on YouTube, Schumer depicted the legalization of marijuana as a move that will spur the economy of New York and help create jobs.

Schumer went on to call for the federal legalization of marijuana.

“I was the first congressional leader of any party to come out in support of ending the federal prohibition on marijuana,” Schumer said. “And I am proud of that.

“And right now with my colleagues Sen. [Cory] Booker [D.-N.J.) and Sen. [Ron] Wyden [D.-Ore.], we are going to put forward advanced, comprehensive cannabis reform legislation that will not only turn the page on this sad chapter in American history, but undo the devastating consequences of these discriminatory and often bigoted policies,” said Schumer.