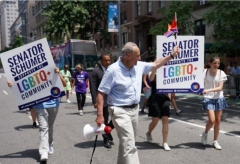 Schumer became the Senate majority leader in January after the 2020 election resulted in a Senate divided 50 to 50 between Republicans and Democrats—with Vice President Kamala Harris casting the deciding vote.

“I’ve marched with #NYCPride for over 20 years, but this is the first time the Senate Majority Leader has marched in the parade!” Schumer said in one of five tweets he did marking the event.

“8 years ago—SCOTUS struck down DOMA [the Defense of Marriage Act],” Schumer said in a tweet on Saturday on the eve of the march. “6 years ago—SCOTUS ruled marriage equality is the law of the land. And today the fight for LGBTQ+ rights continues.

“No one should face discrimination because of who they are or who they love,” Schumer said.

“The Senate will vote on the Equality Act,” he said.

In yet another tweet, he provided a video of himself marching in the parade, waving a rainbow flag and saying: “Happy Pride, everybody!”

In still another tweet, he said: “I’ve marched with #NYCPride for over 20 years. It might look a little different this year, but that couldn’t stop us from celebrating because the LGBTQ+ community is strong!”

In one other tweet, Schumer showed images of himself from previous Pride Parades. “Happy #Pride!,” he said. “Taking a look back at marching with #NYCPRide through the years.”