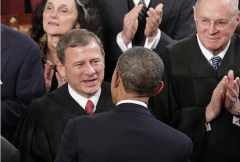 (CNSNews.com) - Chief Justice John Roberts has joined with the courts four liberal justices in allowing Gov. Gavin Newsom of California to limit the number of people who may enter a church or other place of worship—but not an office, supermarket, restaurant, or factory.

Justices Brett Kavanaugh, Clarence Thomas, Neil Gorsuch and Samuel Alito would have granted an injunction against the governor’s order.

Justice Brett Kavanaugh wrote an opinion explaining his dissent that was joined by Thomas and Gorsuch.

“I would grant the church’s requested temporary injunction because California’s latest safety guidelines discriminate against places of worship and in favor of comparable secular businesses,” wrote Kavanaugh.

“Such discrimination violates the First Amendment,” he said.

“South Bay United Pentecostal Church has applied for temporary injunctive relief from California’s 25 percent cap on religious worship services,” wrote Kavanaugh. “Importantly, the church is willing to abide by the state’s rules that apply to comparable secular businesses, including the rules regarding social distancing and hygiene. But the church objects to a 25 percent occupancy cap that is imposed on religious worship services but not imposed on those comparable secular businesses.”

Chief Justice Roberts disagreed with this view taken by Kavanaugh, Gorsuch and Thomas.

“Although California’s guidelines place restrictions on places of worship, those restrictions appear consistent with the Free Exercise Clause of the First Amendment,” wrote Roberts.

“Similar or more severe restrictions apply to comparable secular gatherings, including lectures, concerts, movie showings, spectator sports, and theatrical performances, where large groups of people gather in close proximity for extended periods of time,” he wrote. “And the order exempts or treats more leniently only dissimilar activities, such as operating grocery stores, banks, and laundromats, in which people neither congregate in large groups nor remain in close proximity for extended periods.”