Catholic Cardinal of D.C. on Joe Biden and Abortion: ‘The President is Not Demonstrating Catholic Teaching’ 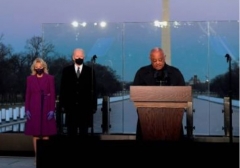 President-elect Joe Biden and Jill Biden with Cardinal Wilton Gregory at the Lincoln Memorial on Jan. 19, 2021 at memorial to honor the lives of those lost to COVID-19. (Photo by Patrick T. Fallon/AFP via Getty Images)

(CNSNews.com) - Cardinal Wilton Gregory, the Catholic archbishop of Washington, D.C, gave a presentation at the National Press Club on Wednesday where, in response to a question he said that on the question of when human life begins President Joe Biden “is not demonstrating Catholic teaching.”

“Last week, President Biden said he did not agree that life begins at conception, the moderator of the event said to Cardinal Gregory. “Were you surprised to hear that and can you clarify the church’s teaching on when life begins?”

“The Catholic Church teaches and has taught that life—human life—begins at conception. So, the president is not demonstrating Catholic teaching,” Cardinal Gregory responded.

But, then, Cardinal Gregory continued by volunteering his observation that there are “theologians” who disagree on when “conception” takes place.

“Now, among the theologians, there’s all kinds of medical issues about when does conception take place,” said Cardinal Gregory. “When? Is it at implantation? Is it at some point when the sperm and the ovum come together and create a new reality? And theologians have debated that and continue to debate that.”

The moderator soon asked Cardinal Gregory: “Has the Catholic Church softened on abortion?”

Nine years ago, in a vice presidential debate with then-Rep. Paul Ryan (R.-Wisc.), Biden said that he believed—in his “personal life”--that life begins at conception.

“With regard to abortion, I accept my church's position on abortion as a, what we call, a de fide doctrine. Life begins at conception in the church's judgment. I accept it in my personal life,” Biden said then.

But at a press conference last week, Biden said the opposite.

Unlike the “theologians” mentioned by Cardinal Gregory, the American College of Pediatricians states that life begins at the moment of fertilization.

“The predominance of human biological research confirms that human life begins at conception—fertilization,” says the American College of Pediatricians. “At fertilization, the human being emerges as a whole, genetically distinct, individuated zygotic living human organism, a member of the species Homo sapiens, needing only the proper environment in order to grow and develop. The difference between the individual in its adult stage and in its zygotic stage is one of form, not nature.”

The Catholic Catechism is unequivocal in stating the life begins at conception and that abortion is always wrong.

“Human life must be respected and protected absolutely from the moment of conception. From the first moment of his existence, a human being must be recognized as having the rights of a person - among which is the inviolable right of every innocent being to life,” says the Catechism.

“Since the first century the Church has affirmed the moral evil of every procured abortion. This teaching has not changed and remains unchangeable. Direct abortion, that is to say, abortion willed either as an end or a means, is gravely contrary to the moral law,” it says.

“Formal cooperation in an abortion constitutes a grave offense,” says the Catechism. “The Church attaches the canonical penalty of excommunication to this crime against human life. ‘A person who procures a completed abortion incurs excommunication latae sententiae,’ ‘by the very commission of the offense,’ and subject to the conditions provided by Canon Law.The Church does not thereby intend to restrict the scope of mercy. Rather, she makes clear the gravity of the crime committed, the irreparable harm done to the innocent who is put to death, as well as to the parents and the whole of society.

“Among such fundamental rights one should mention in this regard every human being's right to life and physical integrity from the moment of conception until death,” says the Catechism.

"The moment a positive law deprives a category of human beings of the protection which civil legislation ought to accord them, the state is denying the equality of all before the law. When the state does not place its power at the service of the rights of each citizen, and in particular of the more vulnerable, the very foundations of a state based on law are undermined,” says the Catechism.

Here is a transcript of Cardinal Gregory’s exchange with the moderator at the National Press Club where he says that “the president is not demonstrating Catholic teaching:”

Cardinal Gregory: “The Catholic Church teaches and has taught that life—human life—begins at conception. So, the president is not demonstrating Catholic teaching.

“Now, among the theologians, there’s all kinds of medical issues about when does conception take place. When? Is it at implantation? Is it at some point when the sperm and the ovum come together and create a new reality? And theologians have debated that and continue to debate that.”

Moderator: “Has the Catholic Church softened on abortion? Let me do a follow on that: The reason why I’m asking about that is because of all the different things that we’re seeing now. And if you can give us your thinking about the new abortion law in Texas. It outlaws abortion when a fetal heartbeat is detected, as early as six weeks into pregnancy, and well before many women even know they are pregnant. So, where does the Catholic Church stand on, I guess, abortion in 2021, which, apparently, is very different than the issue of abortion, say, in the 60s or in the 70s?”

Cardinal Gregory: “First of all, our church has not changed its position on the immorality of abortion. And I don’t see how we could because we believe that every human life is sacred. Every human life is sacred. I was very fortunate to have served for ten years as the auxiliary bishop for Joseph Cardinal Bernardin, the archbishop of Chicago, who ordained me bishop and then tried his best to train me how to be a good bishop. But he has been identified as the author of the consistent ethic of life, which says that life issues are linked. They are not at the same level. There are life issues that are predominant, obviously the conception of a child is the first life concern. But those life issues have to extend to all the other moments of human existence as well. His consistent ethic teaching says that the prisoner, the immigrant, those with physical or emotional handicaps, the very aged and terminally ill, all fall under the issue of the dignity of human life. Now, that position has generated and continues to generate a lot of conversation. Some would say: Well, is he saying that a prisoner who has been found guilty of multiple criminal behavior, is he to be equated with an infant in the womb who is just trying to live and to be born eventually? Oh no, he is not saying that. He’s saying they are linked not because they are the same, but they are linked because they are all human.”