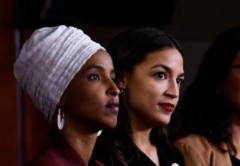 (CNSNews.com) -Rep. Alexandria Ocasio-Cortez (D.-N.Y.) last Tuesday retweeted a tweet sent out by Rep. Ilhan Omar (D.-Minn.) that sent a message to President Joe Biden, saying that a child is now dying every 75 seconds in Yemen.

“A child is dying every 75 seconds in Yemen,” Omar said in the tweet retweeted by Ocasio-Cortez.

Omar’s tweet had, in turn, retweeted a tweet sent out by her communications staffer about her meeting with a group that has been carrying on a hunger strike outside the White House to protest the Saudi blockade of Yemen.

“Please help uplift these activists who have been on a hunger strike for the past 9 days to demand an end to the inhuman U.S. basked Saudi blockade of Yemen,” Omar said in her retweet.

“This is an emergency,” she said. “Yemen is being starved @POTUS and you can help end it.”