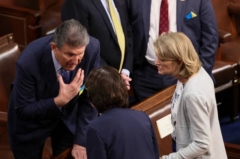 (CNSNews.com) - All 50 Senate Republicans and Democratic Sen. Joe Manchin of West Virginia voted on Wednesday to prevent a final Senate vote on a bill that would legalize abortion through all nine months of pregnancy.

The motion to invoke cloture (and thus end debate) on the Women’s Health Protection Act and bring it up for a final vote was defeated 49 to 50. A Senate cloture motion needs a vote from three-fifths of the members (60 of 100) to succeed.

Republican Senators Susan Collins of Maine and Lisa Murkowski of Alaska joined with all other Senate Republicans in voting against the cloture motion.

The summary of the bill published by the congressional website says: “This bill prohibits governmental restrictions on the provision of, and access to, abortion services.”

The bill itself says: “A health care provider has a statutory right under this Act to provide abortion services, and may provide abortion services, and that provider’s patient has a corresponding right to receive such services, without any of the following limitations or requirements…. (8) A prohibition on abortion at any point or points in time prior to fetal viability, including a prohibition or restriction on a particular abortion procedure. (9) A prohibition on abortion after fetal viability when, in the good-faith medical judgment of the treating health care provider, continuation of the pregnancy would pose a risk to the pregnant patient’s life or health.”

The bill was approved by the House of Representatives last September on a 218 to 211 vote.