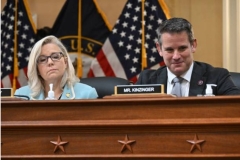 (CNSNews.com) - Forty-seven Republican members of the U.S. House of Representatives joined 220 Democrats on Tuesday in voting to enshrine homosexual marriage into federal law.

The “Respect for Marriage Act” was passed 267-157 by the House with 7 members not voting.

The bill, sponsored by Rep. Jerrold Nadler, is designed to be a backstop if the Supreme Court someday issues a decision overturning Obergefell vs. Hodges, the 2015 opinion in which the court declared that the 14th Amendment had created a right for two people of the same sex to marry each other.

The Obergefell decision, written by Justice Anthony Kennedy, was decided on a 5-4 vote.

“I rise today in strong support for the Respect for Marriage Act, bipartisan and bicameral legislation to enshrine into law a fundamental freedom, the right to marry whomever you choose,” Speaker Nancy Pelosi said in a House floor speech.

“As radical justices and rightwing politicians continue their assault on our basic rights, Democrats believe that the government has no place between you and the person you love,” she said.