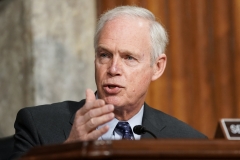 (CNSNews.com) –  When asked if Congress will ever balance the budget, Senator Ron Johnson (R-Wisc.) said, “They’d better,” but added that it will  never happen “under Democrat control.”

On Tuesday, CNSNews.com asked Johnson: “The federal government collected record taxes in the first nine months of this fiscal year, but still ran a $515 billion deficit. Will Congress ever balance the budget?”

When asked about how the deficit spending is hurting the country, Johnson said, “You see 9.1% inflation? There’s damage. That didn’t just happen. That is from out of control deficit spending.”

“Printing dollars we don’t have, that’s what brought us inflation,” said the senator.  “Too many dollars chasing too few goods is being spent helping people stay out of the workforce, producing fewer goods, so now we even have fewer goods.”

“Again, none of this is particularly complex,” he said.  “It’s just the policymakers here in Washington D.C. don’t understand the harm they’re causing.”