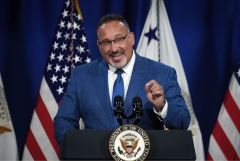 Education Secretary Miguel Cardona introduces Vice President Kamala Harris before she speaks at the Department of Education in Washington, DC, on June 2, 2022. (Photo by OLIVIER DOULIERY/AFP via Getty Images)

In a letter delivered to Education Secretary Miguel Cardona and published online last Wednesday, they argue that the Education Department has cost taxpayers hundreds of billions of dollars by failing “to ensure student loans are administered and payments are collected in accordance with the law.”

The members wrote: “To achieve this, the Department has taken 14 legally dubious actions—all at taxpayer expense.”

The letter complains that the Department of Education has taken these actions, such as pausing student loan payments and forgiving student loans for students who attended Corinthian Colleges, without specifying the laws that allow them to do so and requests that the department quickly explain why they had the authority to take these actions.

As recently as May 6th, Secretary Cardona publicly stated that he is taking action to “fix broken systems” and “make loan forgiveness a reality” in response to speculation that the Biden administration is exploring the possibility of canceling up to $10,000 in student debt for “many borrowers.”

In an interview with NPR, Cardona was asked if the Department of Education would consider forgiving loans after its current pause on loan repayments ends on September 1st. Cardona denied any connection between the pause and loan forgiveness but said that in future policy decisions “we're not just also limiting it to the overall broad loan forgiveness.”

Corinthian Colleges Inc. “was one of the world’s largest for-profit college chains.” The company experienced legal trouble for years and was sued in federal courts over 100 times for misleading or fraudulent claims. In 2015, Corinthian Colleges filed for bankruptcy. The Department of Education “forgave student loans held by about 11,000 former Corinthian students…The cost to taxpayers: about $171 million,” earlier this month.

Last month, the editorial board of The New York Times published an opinion piece arguing that the Biden administration should not cancel student debt “across the board.” Such a move, they claim, would “do nothing to change the fact that future students will graduate with yet more debt” and “could even make it worse.” Moreover, they explain that “such a move is legally dubious, economically unsound, politically fraught and educationally problematic.”

In mid-May, Burr, along with several other Republican senators, introduced the Student Loan Accountability Act, which prohibits canceling student loan debt. In a press release, Burr said, “Taxpayers who did not attend higher education or paid off their student loans responsibly should not be footing the bill for those who didn’t.”

According to Burr’s office, canceling student loan debt “increases inflation rate forecasts between 4% and 20%.” Inflation, as of the end of May, is currently at an annual rate of 8.6%.

Burr also argues that canceling student debt “worsen[s] inequality,” “incentivizes colleges and universities to raise tuition,” and “would add $5 billion each month to the national debt.”