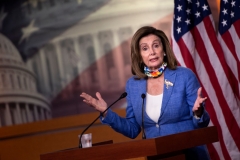 Speaker of the House, Nancy Pelosi, Democrat of California, holds her weekly press briefing on Capitol Hill in Washington, DC, on July 2, 2020. (Photo by BRENDAN SMIALOWSKI/AFP via Getty Images)

(CNSNews.com)— House Speaker Nancy Pelosi (D-Calif.) responded to the Christopher Columbus statue that was torn down by a mob on the Fourth of July by saying Thursday, “People will do what they do.”

In a Capitol Hill press conference on Thursday, a reporter asked Pelosi about the removal of the statue, saying, “Shouldn’t that be done by a commission or the city council, not a mob in the middle of the night throwing it into the harbor?”

Pelosi shrugged her shoulders and said, “People will do what they do. I do think that from a safety standpoint it would be a good idea to have it taken down if the community doesn’t want it.”

She then urged those listening to look toward the future instead of continually looking toward the past.

As CNSNews.com previously reported, Pelosi has supported the removal of statues and monuments, including the portraits of the four former speakers of the House that she removed for their ties to the Confederacy.

Pelosi said Thursday that “heroes” like George Washington, Thomas Jefferson and Abraham Lincoln would “want it to be about looking forward and not looking back.”
She told those in attendance to “think about what are the values, the vision, the perspective we enshrine” instead of “having a big fight about ‘was somebody worth—‘

“We know they’re not worth it if they committed treason against the United States,” Pelosi concluded.

Baltimore Mayor Bernard C. “Jack” Young had a much different reaction to the destruction of the statue. The Democratic mayor said that those who tore down statues will be prosecuted, the Baltimore Sun reported.

The Christopher Columbus statue was pulled down by a mob on the night of the Fourth of July and thrown into Baltimore’s Inner Harbor. The statue had been standing at Little Italy in Baltimore since 1984.

Pelosi, who is from Baltimore, grew up near Little Italy where the statue stood.