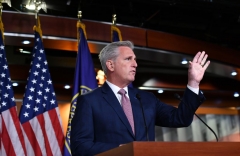 “This should have been a week to show the nation that we could come together to solve problems., but if you had any doubts that Democrats were never interested in working together to reach a solution, Speaker Pelosi dispelled it yesterday,” he said.

McCarthy explained how he had refused to speak on what he disagreed with on the Democrats’ bill, because he wanted to find a place where both parties could agree.

He then spoke about how the Republican Party’s attempt to find common ground was met with opposition.

“Contrast to how Speaker Pelosi responded to Tim Scott’s bill,” McCarthy said. “She said, ‘Republicans are trying to get away with murder—the murder of George Floyd.’ Tim Scott has not been working on this bill just for one month. This has been a life passion for Tim, with his own personal life experience.”

“Her words are reprehensible,” he continued. “This is actually a new low for Speaker Pelosi when it comes to just trying to score points with her newly radical base. Think for one moment. This is the speaker of the House of Representatives.”

“The job of Speaker is too big for words so small,” McCarthy said.

He said the Republicans offered 20 amendments to Democrats just to get the debating started. In contrast, the Democrats didn’t offer Republicans a single amendment and never consulted anyone outside their party during the creation of their bill.

“The only place where this is a holdup is the Democrats’ partisanship, to try to make this political, instead of finding a solution," McCarthy said. “Name me one amendment Republicans are being offered to even debate on the floor - not one.”

“And then the words of the Speaker. America expects more and deserves more,” McCarthy said.

McCarthy also discussed how Pelosi was trying to appease the radical left by being silent on the riots and on the removal of statues. He also noted that rioters had attacked a Democrat Senator, kicked him in the head and knocked him out without a single word from the speaker.

“So much for the ‘peaceful’ protests the Speaker continues to celebrate,” McCarthy said, “Civil society cannot survive with this type of lawlessness.”

He continued by saying he thought that cities and state leadership officials who failed to uphold the rule of law in their cities should be defunded by Congress.

“The time for warnings has lapsed,” McCarthy said. “Order will be restored. Republicans have spoken up, and the silence of the left has been deafening. It’s time to restore this nation and rebuild it, and the way you do that is you start by passing a bipartisan bill that will become law.”

“This is the moment in time we should rise to the occasion …  to have a solution. With the speaker, it’s been all politics, putting us on a course for failure,” McCarthy concluded.