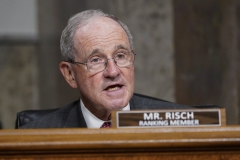 (CNS News) -- In reference to the Democrats’ “For the People Act,” which would eliminate state voter ID laws, Sen. James Risch (R-Idaho) said, ‘Yes,’ voters should provide an ID at the polls. On Tuesday, Senate Republicans successfully filibustered the “For the People Act,” preventing the Senate from moving forward with the legislation.

At the U.S. Capitol on Tuesday, CNS News asked Senator Risch, “Do you think a person should show ID when they go to purchase alcohol?”

CNS News then asked, “And how about to vote?”

In an analysis of the “For the People Act,” the conservative Heritage Foundation wrote that it “would federalize and micromanage the election process, imposing unnecessary, unwise, and unconstitutional mandates on the states.”

Second, “It would reverse the decentralization of the American election process, an essential protection of our liberty and freedom.” Finally, “It would implement nationwide the worst changes in election rules that occurred in 2020 and further damage or eliminate basic security protocols.”

The Republican National Committee noted, "S. 1 would eviscerate commonsense state voter ID laws which 36 states have passed. This would allow individuals to vote by simply attesting they are who they claim to be."

On Tuesday, Senate Republicans filibustered the “For the People Act,” preventing it from moving to debate in the Senate. The vote was 50-50 along partisan lines. Sixty votes were needed to advance the legislation.

“Now, Republican senators may have prevented us from having a debate on voting rights today,” said Senate Majority Leader Chuck Schumer (D-N.Y.). “But I want to be very clear about one thing: the fight to protect voting rights is not over. By no means. In the fight for voting rights, this vote was the starting gun, not the finish line.”

Senate Minority Leader Mitch McConnell (R-Ky.) said, "Look, what this is really about is an effort for the federal government to take over the way we conduct elections in this country…. It is a solution in search of a problem."

CNSNews.com: “Do you think a person should show ID when they go to purchase alcohol?”

CNSNews.com: “And how about to vote. May I ride with you?”

CNSNews.com: “Thank you so much.”