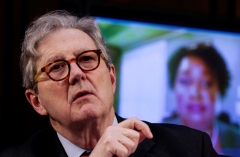 (CNSNews.com) - Sen. John Kennedy (R-La.) said Wednesday that the “For the People Act” (S.1) “is woefully, awfully, badly, and naively conceived” in its attempt to usurp states’ authority on voter ID.

On Tuesday, Senate Republicans successfully filibustered the “For the People Act,” preventing the Senate from moving forward with the legislation.

At the U.S. Capitol on Tuesday, CNSNews.com asked Kennedy, “Should a person show an ID when they go to purchase alcohol?”

CNSNews.com then asked, “And how about for voting?”

CNSNews.com further inquired “and what do you think about the S1 purposing to overturn the state’s authority to decide that?”

“I think, I think it’s unconstitutional, and I think it is woefully, awfully, badly, and naively conceived,” Kennedy said.

In an analysis of the “For the People Act,” the conservative Heritage Foundation wrote that it “would federalize and micromanage the election process, imposing unnecessary, unwise, and unconstitutional mandates on the states.”

Second, “It would reverse the decentralization of the American election process, an essential protection of our liberty and freedom.” Finally, “It would implement nationwide the worst changes in election rules that occurred in 2020 and further damage or eliminate basic security protocols.”