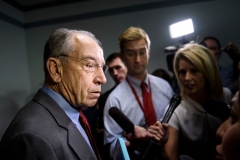 (CNSNews.com) – When asked whether he will be able to read the 2,702-page infrastructure spending bill now under consideration in the Senate, Sen. Chuck Grassley (R-Iowa) said, “No, the way we’re doing this is, I’m reading part of it. I got three staff people on it, and we’re. . . teaming up with two other senators to make sure that we cover all of the things.”

CNSNews.com asked Sen. Grassley on Tuesday, “Will you be able to read all 2,702 pages of the infrastructure bill?”

“No, I gotta—No, the way we’re doing this is, I’m reading part of it. I got three staff people on it and we’re—and we’re teaming up with two other senators to make sure that we cover all of the things. Now, about half of it is stuff that we already know, you know, like the programs for the highways for the last 20 years. Those things haven’t changed a lot,” Grassley said.

In an Aug. 3 statement about funding the infrastructure bill, Sens. Ted Cruz (R-Texas), Ron Johnson (R-Wis.), Rick Scott (R-Fla.), Marsha Blackburn (R-Tenn.), Mike Braun (R-Ind.), Josh Hawley (R-Mo.), and Mike Lee (R-Utah) said, “We can't spend money we don't have. Period. Just look at what is happening with inflation. We were promised this infrastructure bill was fully paid for, and now we see that it's not. This was nothing more than a bait and switch.

The statement added that “$205 billion of this bill was to be paid for with repurposed COVID funds. The latest proposal only shows $50 billion in COVID funds being used, as well as a lot of the proposed ‘pay-fors' missing.

“So we are asking our colleagues: How is this infrastructure spending bill being paid for? We still don't know. We still don't have a score on this legislation from the Congressional Budget Office. Let's not forget, this is just the first step in the Democrats' plan to pass their $5.5 trillion tax-and-spend liberal wish list. We support infrastructure, but it has to be paid for. This proposal isn't it," the statement read.