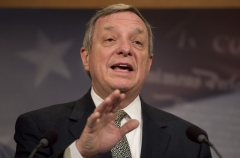 Durbin was responding to a question that CNSNews.com asked him in light of the budget proposal President Joe Biden has presented to Congress, which projects that the federal government will run $14.5 trillion in cumulative deficits over the next ten years.

“President Biden has presented Congress with a budget that proposes running $14.5 trillion in deficits over the next decade. Will Congress balance the budget?”

While it would be unrealistic to try to balance the budget, Durbin said, Democrats are focusing on reducing the size of the nation’s debt in relation to its Gross Domestic Product:

“Well, I can tell you that balancing the budget is not realistic. It hasn’t happened. The most progress made was by a Democratic President, Bill Clinton, in modern memory.

“I think that is a realistic goal. And, certainty at this moment in time, we’re trying to get people back to work and businesses started again, cutting back on some of the incentives might be a good idea.”

When asked in what year Congress might balance the budget, Durbin laughed and said, "I can't tell you that."