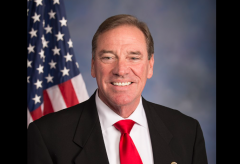 (CNS News) -- When asked whether Americans should have to show an ID in order to vote, Rep. Neal Dunn (R-Fla.) said, "Yeah ... absolutely."

At the U.S. Capitol on Tuesday, CNS News asked Dunn, "Should a person show an ID when they go to purchase alcohol?"

CNS News then asked, "And how about to vote?"

Dunn replied, "Yeah, why not? Absolutely."

The Republican National Committee has denounced the Democrats’ efforts, saying, “Democrats are currently attempting a partisan power grab with their radical H.R. 1/S. 1 ‘For The Politicians Act.’” This bill, filibustered for the time-being, “is a federal takeover of state elections that would eviscerate commonsense state voter ID laws currently in place in many states, force states to allow ballot harvesting, and make taxpayers fund the campaigns of career politicians.”